Harvick Gunning For Another Martinsville Score 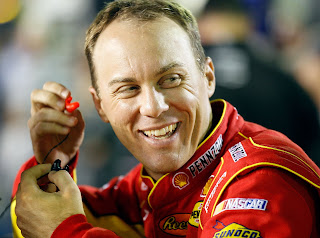 Few venues on the NASCAR circuit have been kinder to Kevin Harvick over the years than Virginia’s Martinsville Speedway, and Harvick will look to add another grandfather clock to his collection when he climbs into the No. 24 Tide Chevrolet Silverado in Saturday’s NASCAR Camping World Truck Series race there.

Harvick is gunning for back-to-back victories in the spring race at Martinsville, after recording three wins in 15 career Truck Series starts there, along with two poles, seven Top-5 and nine Top-10 finishes. The California native has led a total of 584 laps around the 0.526-mile paperclip-shaped Virginia track, including 248 of 250 last year to claim his 14th Truck Series victory. Should he win Saturday's 250-lap contest, it would be his third victory in the last four Martinsville Truck starts.
He will have a new face guiding his effort Saturday, with veteran crew chief Paul Andrews calling the shots. Andrews, a native of Bangor, Maine, is best known for leading Alan Kulwicki to the 1992 Winston Cup championship. In his tenure as a NASCAR Cup Series crew chief, he has collected 12 victories and 30 poles.
“Martinsville is one of those race tracks where I always look forward to getting behind the wheel,” said Harvick today. “I’ve had a lot of success in the Truck Series at Martinsville, so hopefully that trend will continue this weekend with NTS Motorsports."
Harvick will be one of two drivers pulling double duty this weekend, logging more than 750 laps in the No. 24 Tide Silverado and his Sprint Cup Series entry, the No. 29 Budweiser Chevrolet SS.
Posted by Dave Moody at 3:02 PM