Pocono Announces "Party In The Poconos 400 Presented By Walmart" 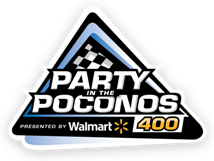 Pocono Raceway and Walmart announced today the new name for the June 9 NASCAR Sprint Cup Series race at Pocono Raceway, as voted on by race fans, will be the “Party in the Poconos 400 Presented by Walmart.” Additionally, fan voting for the official June 7 – 9 race weekend concession item, from three fan-submitted pierogi recipes, begins today.


“Party in the Poconos 400” was chosen, following a four-week, fan-driven vote between three fan-submitted race names. Nearly half of the overall votes for the new race name were in favor of “Party in the Poconos 400.” The other race name submissions were the “Race More, Live Better 400” and the “Pocono for the People 400.”
Fans will continue to have their voices heard as they vote on the official race weekend concession item, to be sold at select Raceway vendor locations. Voting begins today and fans will vote on one of the following fan-submitted pierogi recipes: Hot Honey Buffalo Wing, Loaded Baked Potato or Sweet Cinnamon Sugar. To vote, please visitwalmarturl.com/fandriven400. Concession item voting ends on May 6.
Additionally, Pocono Raceway and Walmart are making the 400-mile June 9 race more affordable for fans by offering 16,000 Concourse Grandstand Tickets for $25 each. Tickets can be purchased by visiting www.poconoraceway.com or by calling 1-800-RACEWAY (1-800-722-3929).
Further fan involvement will include a vote on the Chevrolet Camaro SS Pace Car design, to be used throughout the June “Party in the Poconos 400 Presented by Walmart” race weekend. Voting for the pace car design will run from May 7 – May 27.
Posted by Dave Moody at 4:23 PM