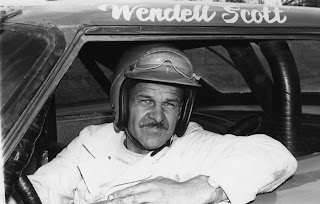 NASCAR pioneer Wendell Scott was honored today by the state of Virginia, with placement of a historical highway marker listing his achievements in front of his former home in Danville.


Scott was the first African American driver to race consistently in what is now the NASCAR Sprint Cup Series, and claimed his lone main-event checkered flag on Dec. 1, 1963, at the now-defunct Speedway Park in Jacksonville, Fla. NASCAR president Mike Helton was among the dignitaries who honored Scott today, with the public unveiling of a Virginia Department of Historic Resources marker on what is now Wendell Scott Drive in Danville. Other speakers included NASCAR VP of Public Affairs and Multicultural Development Marcus Jadotte, NASCAR Hall Of Fame Executive Director Winston Kelley and Danville Mayor Sherman Saunders, who proclaimed today “Wendell O. Scott Day” in Danville.
The marker honors Scott for “persevering over prejudice and discrimination (and breaking) racial barriers in NASCAR with a 13-year career that included 20 Top-5 and 147 Top-10 finishes.” One of Scott’s former race cars was also on display.
The Virginia native passed away on Dec. 23, 1990, but was among 25 nominees for the 2013 Class of the NASCAR Hall Of Fame, He narrowly missed being selected for induction and is expected to receive serious consideration once again for the 2014 class. He is already a member of 13 Auto Racing Halls of Fame, including the International Motorsports Hall Of Fame in Talladega, Ala.
Posted by Dave Moody at 12:14 PM