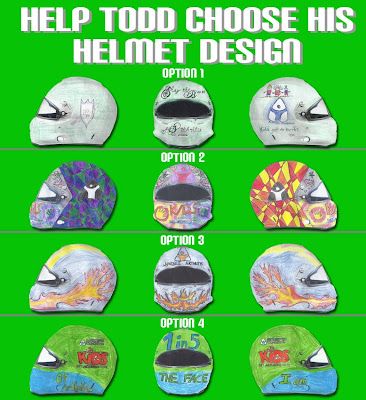 Todd Peck is asking for help from the NASCAR community to decide the design of his race helmet.


At the beginning of the season, Peck asked children with Juvenile Arthritis to send him original artwork for his helmet. Hundreds of schemes were submitted to his website, where a panel of judges narrowed it to four final designs. The finalists are posted on his Facebook page, www.facebook.com/peck-motorsports, where everyone can vote for their favorite design through May 6.


Peck will wear the helmet that receives the most votes in all of his 2013 NASCAR Camping World Truck Series races and give it to the winning designer at the conclusion of the season. Additionally, a duplicate helmet will be produced and used to raise funds for the Arthritis Foundation in 2013.


Peck, who lives with arthritis and was diagnosed as a juvenile, has used his race team as a platform to help children who also fight the condition. His Silverado carried a "Kids get Arthritis too" decal throughout the team's 2011 and 2012 schedule. The team has hosted kids and their families who suffer from juvenile arthritis at several races, and has named Juvenile Arthritis as its official foundation and charitable outreach. Peck is thrilled to use another of the team's elements to help kids with JA.

"We loved all of the drawings that came in for my helmet design contest," Peck said. "The contest really showed that kids with arthritis can continue to do great things. They did an amazing job and it was tough to narrow it down to the finalists. Whichever design is chosen, I know that I'll have a very special reminder of a kid's hard work every time I go racing."


Todd Peck started his career driving go-karts. He worked his way up to the national levels in karting before advancing to the Allison Legacy Series. Peck has experience in the Rev-Oil Pro Cup Series, more than 15 starts in the NASCAR K&N Pro Series East and five starts in the NCWTS. He has done all of this while overcoming the conditions of living with arthritis.


For more information, log onto www.peckmotorsports.com.
Posted by Dave Moody at 4:59 PM