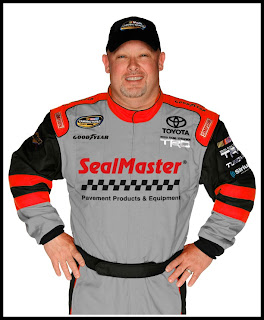 Todd Bodine is a former NASCAR Camping World Truck Series winner at Kansas Speedway, and he's on a hot streak at the recently repaved and reconfigured speedway. This weekend, he hopes to cintnue that streak, driving a loaner truck from ThorSport Racing teammate Matt Crafton's team -- renumbered as a No. 13 SealMaster Toyota.


While ThorSport teammate and championship leader Johnny Sauter is the Truck Series' highest-rated driver over the past eight years at Kansas, Bodine's rated fourth heading into Saturday's SFP 250.
And Bodine, who won at Kansas in 2005 and has six top-10 finishes, has overall numbers almost as good as Sauter's, even taking into account Bodine, a two-time series champion, has five more starts, nine total, than his teammate's four. Bodine has an average start of only 15th but an average finish of 8.8 and an average running position of 9.5 in that eight-year period.
Best of all, Bodine's on a streak of three consecutive top-five finishes, including fifth last season and third the two previous years.
"There's no reason we can't continue that streak," Bodine said. "From what I understand it's a really good aerodynamic truck we're taking, Kansas has new pavement so it's going to be about horsepower and aerodynamics. With the trucks I don't think we're even going to be letting off the gas so it'll be who can hold it wide-open the longest.
"From what I understand we should be able to do it for a whole (fuel and tire) run, so hopefully we can put it together. Passing will be tough because the faster trucks will run the same speed and it's hard to pass when you're running the same speed. And handling is critical -- you have to have it free and let it roll and not bog down, because if you bog down in the corner, that's when they'll pass you."
Bodine's looking to rebound in the championship in his fourth start for ThorSport. He went to Rockingham last weekend seventh in the standings after only two races with ThorSport, but a late crash knocked him back to 14th in the points -- though he's only 10 points out of the top 10.
He hopes his fourth race with crew chief Jeriod Prince will result in the decent results -- two 11th-place finishes -- that they enjoyed before the off-day at Rockingham, but improved a good bit by Bodine's track record at Kansas.
"That's part of being an experienced driver -- helping the crew chief make the truck faster," Bodine said. "There are a lot of guys that can't do that, but because of my background and years of experience I feel like that is one of my stronger attributes, being able to help the crew chief."
The pair will get a chance to put it into play with four hours and 10 minutes of practice Friday, before the series qualifies at 11:05 ET Saturday.
"I think a lot of Jeriod," Bodine said of his former driver who now is managing both Frank Kimmel's ARCA Racing Series championship-leading team and also Bodine's truck team, which includes most of the same men. "I think Jeriod's very smart and if we could work together for a while and he'd get to know me and what I like and how to get it, I think we could have some success.
"But that takes time. We ran real well at Daytona and Martinsville and you can't let one (sub-par) run (at Rockingham) color the season."
Posted by Dave Moody at 7:17 AM