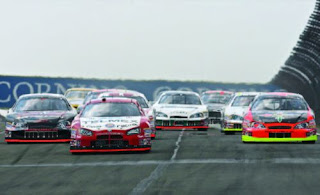 NASCAR announced today that the NASCAR Sprint Cup Series will implement the group-based road course qualifying procedure used in NASCAR Nationwide and NASCAR Touring Series competition during its road-course events at Sonoma Raceway and Watkins Glen International. Under the new procedure, cars will qualify in groups instead of the traditional single-car qualifying runs held on oval race tracks.


“The change will add an exciting element to road-course qualifying,” said Robin Pemberton, NASCAR vice president of competition. “Fans will be treated to new strategy and increased competition with several cars on track at once.”
The new qualifying rules for the NASCAR Sprint Cup Series at road courses are as follows:
·         Cars attempting to qualify will be divided into groups. The number of groups, and amount of cars in each, will depend on the number of cars that practice for the event.


·         Group assignments will be based on final practice times.


·         Each qualifying group will be on-track for a set period of time, determined by the Series Director.


·         A car’s best lap time during the group session will be the qualifying lap time of record.


·         A group’s time begins when the first car receives the green flag at the start/finish line.


“This is going to be a terrific new format for our NASCAR weekend,” said Steve Page, president and general manager of Sonoma Raceway. “It will intensify the action, with multiple cars on the track at the same time. It’s a very positive development for our fans.”
“The new format of qualifying at Watkins Glen International enhances the fan experience which is our top priority,” said Michael Printup, president of Watkins Glen. “Qualifying on Saturday for our Cheez-It 355 at The Glen is even more of a not-to-be missed aspect of a weekend of high-quality racing.”
The new format will debut with the Toyota Save-Mart 350 at Sonoma Raceway on June 23 and will return at Watkins Glen for the Cheez-It 355 at the Glen on August 11.
Posted by Dave Moody at 5:30 PM