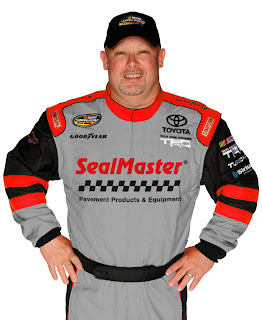 There's no doubt that Todd Bodine knows how to be competitive at Martinsville Speedway. But when your last name is Bodine and you’re racing in Martinsville, Va., “competitive” just isn't good enough.


You're expected to win.
Bodine’s older brothers, Geoff and Brett, have set an extremely high bar for success at Martinsville. Geoff is the only driver in the history of the legendary speedway to have won in Modifieds, Late Model Sportsmen (now NASCAR Nationwide Series) and Cup Series cars, and notched the first-ever win for the team now known as Hendrick Motorsports.
Big brother Geoff was part of the greatest finish in the track's history, combining with the late, great NASCAR Hall Of Famer Richie Evans for a spellbinding final lap that saw both cars ride the front stretch wall in a shower of sparks while crossing beneath the checkered flag in 1981. Middle brother Brett owns two career Martinsville Modified Tour wins, as well as two Busch Series victories on the distinctive, .526-mile oval.
Being winless at Martiinsville is a heavy burden for Todd Bodine to carry, and he'll line-up his No. 13 SealMaster Toyota on the Virginia half-mile for the 18th time in his NASCAR Camping World Truck Series career when the Kroger 250 goes green on Saturday afternoon.
"I need to get it done, because I'm not going to have a whole lot of shots left at Martinsville," said Bodine, a two-time Truck Series champion with 22 career series wins. "It would mean a lot to get that win, and the pressure is getting high, so I've got to get it done."
Bodine has seven Top-10 finishes at Martinsville over the years – including a pair of runner-up showings but knows second place is not good enough.
He was a key figure in ThorSport Racing teammate Johnny Sauter’s win in the season-opener at Daytona International Speedway six weeks ago, and will counting on Sauter and fellow ThorSport teammate Matt Crafton for as much advice as he can get, since Bodine did not take part in a recent Martinsville test session. He does have the benefit of crew chief Jeriod Prince, however, a short-track racer in his own right who climbed behind the wheel and shook-down Bodine's truck during the test and ran within two-tenths of a second of Sauter on older tires.
"I know Johnny and Matt's success (at Martinsville)," Bodine said. "And as well as they run, we should unload with a good set-up, be very close and hopefully get another opportunity to run up front.
“You’ve got to have everything to succeed at Martinsville," Bhe said. "The truck's got to stop, it's got to turn and it's got to get up off the corner. If you lack in one area, you know you're half a tenth (of a second) off. And at Martinsville, if you're half a tenth off, you're not going to win.
"You’ve got to have good strategy, be able to pit in the right sequence and do the right things there to get your track position. I think Jeriod's got enough experience; not only as a crew chief but as a car chief. He's seen enough races that he understands how to get that done. I think he'll do just fine.
"For as little time as we've spent together, I've got a lot of confidence in him. I think he's very smart and very confident at the job."
While Bodine knows the ideal strategy to employ in Saturday’s race, he also understands that circumstances don’t always teams to play their cards at the proper time.
"Obviously, you want to be at the front and have the best tires you can have,” he said. “We're going to have to watch the tires in practice, know how much the lap times are going to drop off… and do your back-run from the end of the race and figure out when you want to pit.
"Hopefully, you can get a chance in there somewhere,” said Bodine, “but then when you pit, the odds are that most of the field is going to pit (with you), so you’ve got to get a good pit stop and get out (in front)."
If everything works out perfectly Saturday, Bodine hopes to join his brothers as Martinsville Speedway victors.
Posted by Dave Moody at 2:20 PM