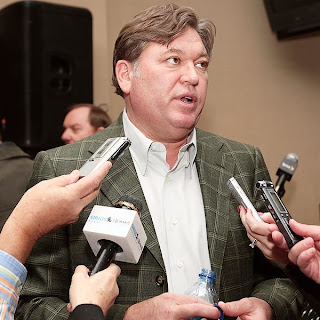 NASCAR vice president of competition Robin Pemberton made it clear Friday that the sanctioning body is not in the business of reading minds, or judging intent.


Pemberton said the penalties handed down against Joe Gibbs Racing this week were the result of a clear breach of the Sprint Cup Series rulebook, and that NASCAR’s does not include determining whether violations were intentional, or provided a performance advantage.


"Over the last two or three weeks… we've had some significant penalties,” he said. “They're in all areas of the rule book.  We're here to not judge… whether they are performance enhancing. We're here just to regulate the rule book.
"We've got rules in play,” said Pemberton. “They're put there by NASCAR, with input from the teams, manufacturers and outside experts. It's our job to manage those rules as it relates to the garage area. When a guy exceeds pit road speed by six miles per hour but doesn't gain any positions, he still exceeded (the speed limit). He gets a penalty."


Pemberton said there are three areas of the race car that teams know are off-limits; engines, tires and fuel. And while teams like JGR often purchase engines and components from outside vendors, he said they remain responsible for the legality of the final product.


"I don't want to be cold about it, but that's just the way it is," Pemberton said. "(The teams) know ahead of time where they're supposed to be."


“We've put parameters in -- weights, measures, heights, dimensions, coordinates to build chassis and bodies -- and it's in quite (a bit of) detail. The teams know where they can and can't go, and there are areas that they can work in.”
He also defended the severity of the sacntions, saying, "We feel like we're consistent, but not every violation is exactly the same. We do our best. We feel like we do a good job interpreting the rules and levying the penalties they deserve.


“We're not here to judge the performance on any of these (violations).  We are strictly here to regulate the rule book and keep a level playing field for the garage area… and make sure everybody gets a fair chance at competing."
Posted by Dave Moody at 1:06 PM