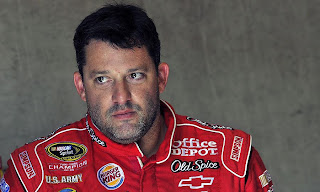 Tony Stewart said today that while his clash with Joey Logano two weeks ago at Auto Club Speedway is over and done, he is not about to change his stance on blocking in NASCAR.


“That’s two weeks ago,” said Stewart to reporters. “I’m on to Martinsville this weekend. We are trying to figure out what we have to do to make our race cars go fast this week.”
Stewart says he has not spoken to Joey Logano about their Fontana fracas, and does not plan to.
“We are in Martinsville, Virginia this week,” he said. “I’ve got a lot of stuff to do other than worry about something that happened two weeks ago. I can’t change it. I can’t do anything about what happened two weeks ago. All I can do is worry about our Rush Truck Centers Chevrolet, (Danica Patrick’s) GoDaddy Chevrolet and (Ryan Newman’s) Quicken Loans Chevrolet. That is what I have to focus on.
“I gave everybody more than ample time to ask me all the questions they wanted two weeks ago about what happened two weeks ago. It’s time to move on from here.”
While acknowledging that not everyone agrees with his “no blocking” philosophy, Stewart said he has no plans to change his point of view.
“My stance has never changed about blocking,” he said. “Everybody has got a different opinion. (For) the last two weeks, everybody has tried to make a comparison to the Talladega deal. Talladega is a little different deal than the rest of it. I don’t like it at Daytona and Talladega either, but it’s the position we are put in there. What happened at California is a different deal.
“The people that are trying to compare the two… it’s disappointing that they don’t understand the sport any better than that. There is a huge difference between the two. I don’t like blocking, I never have (and) I never will. It’s our job as drivers to go out there and try to pass people. That is what racing is about. We didn’t have blocking 10 years ago. I don’t know where all of a sudden it became a common deal, or (how) some people think it’s alright to do now.
“I don’t believe in it. I don’t believe it should be common practice.”
The former Sprint Cup Series champion said he sees no need for NASCAR to step in and begin policing the practice.
“NASCAR’s position has always been let the drivers handle it (and) I don’t think NASCAR should have to be put in that position,” said Stewart. “It’s like they tell us in the drivers meeting each week; we are the best drivers… in the country driving these things. We should be able to handle it on our own.
“As drivers get younger and younger, (they) come in they come in with their own set of ideas,” he said. “I just know how it would have been 12 or 14 years ago if I would have tried to do that on a restart. I know what would have happened. The opinions are divided now.
“If you did something wrong around a veteran driver, they taught you quickly how you made a mistake, (that) what you did wrong and that is not acceptable. NASCAR has got enough stuff that they have to worry about.”
Stewart also admitted that blocking with likely continue on superspeedways, however, adding, “We don’t have a choice. We can’t get away from each other there. It’s not so much that you are trying to block, as much as you are trying to make that guy… push you. We don’t have the luxury of running on our own there. You have to have somebody pushing you. So if there is a line coming, you want that faster line to pick you up and push you.
“The last half lap at Talladega is different than a restart with 15 to go at California.”
Posted by Dave Moody at 4:12 PM